Veg; we pronounce that veg don’t we?  Like with a proper Veh and a snippy juicy G at the end.  But vegan is Vee – ghan; limpy and insipid sounding, like it’s a pastel colour, too polite even.

That was just a thought that ran across me notes, nothing more.

So, a first, Vegan week.  I don’t know what the fuss was about with the hash-tagging crowd with their boycotting and cribbing about Bake Off going too far from the original tent.  Jesus you’d swear they’d have gotten over Noel by now.  Who actually looked more normal last night than other shows this season.

I thought it was interesting meself, I’m not going to try anything, well maybe that Technical since I make my own hummus all the time anyway so I might as well give it a lash insteada throwing the stuff out.

Sum’ting else in defense of vegan week, ok there’s no fear ah’ me giving up the butter n’ the cream or an’ting of the sort, but any Bake Off follower and home baker would want ta hear what the Bake Off Judges would have ta say about baking without dairy n’ eggs n’ stuff, wouldn’t they?

Ah, anyway.  I enjoyed it, even though, and this happened before too, I predicted Kim-Joy star baker when they introduced the week’s theme.  True, no word of a lie.  But unlike the last time I called it so early an’ was more interested in seeing if I was right rather than enjoy the show, I actually did pay attention all the way through last night’s.

In an interesting way like.  And as I said earlier that Technical was useful learning for this home baker anyway.  Mind you, I hope they don’t do any more ov’em.

Nothing much in the signatures for me, the only stand out was with the way the Hollywood made such a commotion about his handshake that it had me wondering, was he hesitating because he was after getting too flaithúilach with them or was it because he didn’t want to stamp vegan grub with one?  Comment away on that lads

Anyway, the showstopper.  I suppose if you were to do one it would be have to be Briony’s Chocolate Hazelnut one.  The only thing about it is it has sum’ting you mightn’t have to hand or like me, never used before; xantham gum.  But its easily got and shur’ its in loads of shop bought stuff anyway.

Although tbf, when the Hollywood cut inta them, they all looked like insides of a seat cushion; didn’t they?

Jon’s gone but you’ll have seen from the trailers they’re sending him off in style with them all wearing commemorative shurts in his honour.  There can be no doubt the lad was a goner anyway; but a great baker and a great contestant in this years tent.

As I said earlier about Kim-Joy, she was in the running the moment we saw the yellow eye-shadow, but funnily enough none of her bakes made it into the cut on the official website.

And a shout out for poor oul’ Ruby like she didn’t deserve for it to happen, and she, of them all has really surprised and thrived week on week.  I seriously didn’t expect her to last, nor expect her to grow on me, and it seems like everyone else too, like when that cake finally gave up on her it was like the tent deflated in sympathy for her along with everyone else. 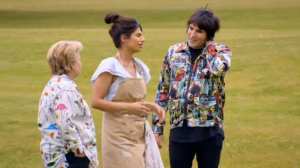 I have no idea either.  Probably some pastry.

Sorry about the relocation folks.  It wasn’t my decision n’ don’t ask me why, ’cause I still don’t know the real reason either.

So Troll Up Troll Up lads; the more the merrier.

Bloggard, openly Gah. Sometimes have loads ta' say; Sometimes nathin'. I'll just park the lot here 'till I'm told to move on. And here' there might be baking stuff lobbed up too. For other stuff see @frillykeane on twitter or https://www.broadsheet.ie/author/vanessa-foran/ View all posts by Frilly Keane